The Euro 2016 football tournament kicks off in France on June the 11th. There are 51 games scheduled in total over 4 weeks, across 10 French cities, with 24 national teams traveling to take part in this fantastic spectacle. All tickets for the tournament were sold through a lottery type process directly with UEFA, who are the governing body of European football. The demand for tickets has been phenomenal with only a very small majority of fans being lucky enough to acquire tickets for games. To put this demand into context, 8,107 Ireland supporters successfully won tickets to see a group game through the UEFA portal with over 275,000 Irish supporters registering for these tickets. Just as in most cases, when demand far out reaches supply then there will be people who will try to take advantage of those desperately seeking a ticket.

UEFA have warned fans of the possibility of scam emails and sites that could be aimed at those who have registered for tickets but have been unsuccessful. These emails could state the availability of new tickets being available or that you won a UEFA lottery. 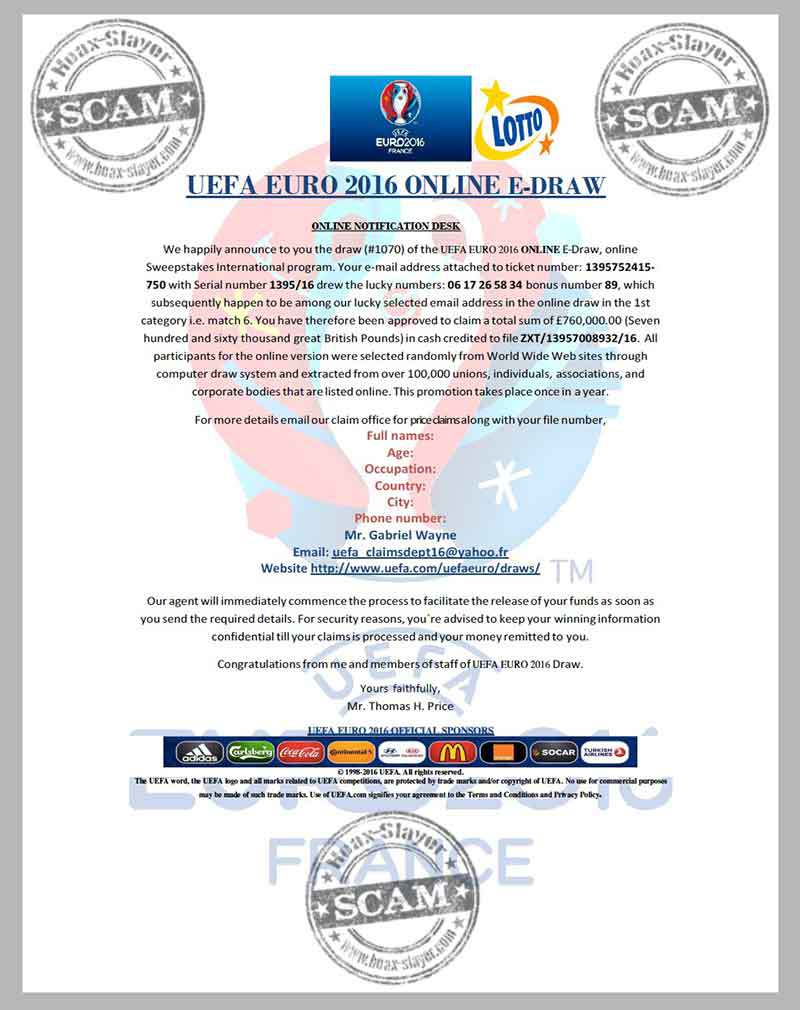 You may think that people don’t fall for these type of scams anymore, but they do. In the UK last year over £5 million was taken by online fraudsters cashing in on loyal sports fans, this is up from £3.35 million from the previous year.

These fraudsters have the ability to create realistic looking emails that can filter through or be targeted to your free email accounts such as Gmail, Yahoo, and Outlook etc. The key thing to be mindful off is that firstly with the tournament beginning in such a short time that the likelihood of any further tickets being realised by UEFA to fans is quite slim. Any tickets that are available are no longer at face value with touts mainly selling on for profit. So if you are notified of a “face value” ticket being offered through your email then it’s most likely a scam and certainly not from UEFA.

Lastly, always throw caution to the wind in these cases. If the price and circumstances looks too good to be true then it most definitely is too good to be true. We hope all travelling to the tournament without tickets have a safe and enjoyable experience.